Cappadocia is one of those places that you really should visit if you are spending any time in Turkey. The strange landscape looks as if it belongs on a different planet. For hundreds of years people have lived here creating underground cities with monasteries, churches and dwellings.
With its fairy chimneys and brilliant sunrise and sunsets the landscape is spectacular. People have been living here since the bronze age. First the Hitites who were followed by the Assyrians, the Persians, the Romans and then under Christian influence these lands have seen some interesting changes.
You probably need a good 3 or 4 days to explore the area fully. Be sure to visit Urgup, Goreme and Avanas and at least one of the underground cities. There are plenty of good hotels and restaurants and you can hire a quad bike rather than a car to get around the various sites.
There is a lot to do and see in Cappadocia. If you do decide on a balloon flight make sure you go with one of the reputable larger established companies.
Posted by BUK24hours at 09:12 No comments:

Chios is the 5th largest of the Greek Islands. It is famous for its mastic and claims to be the birthplace of Homer. Just a short ferry trip across the water from Cesme in Turkey it is well worth a visit.
The town of Chios has a number of car rental agencies if you need to hire a car for the day and a choice of good restaurants. There is a Byzantine Museum housed in an Ottoman mosque and a Naval Museum.
With its windmills, local pottery and the natural product of mastic, cultivated by hand and extracted from the Pistacia lentiscus or Mastic Tree which is an evergreen shrub or small tree of the genus Pistacia.
The island has numerous beaches and is best explored by car or motorcycle.
Posted by BUK24hours at 05:47 No comments: 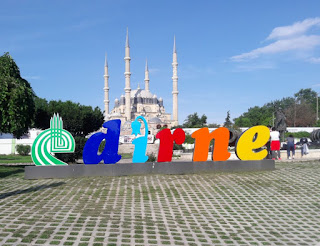 Edirne used to be called Adrianople or Hadrianoupolis after the Roman Emperor who founded it. In the 14th century it was captured by the Ottomans and became their capital until they conquered Constantinople. This was, and remains today, a key strategic city with easy access to Istanbul, Bulgaria and Greece. Evidence of its Imperial past is everywhere. From the neo-classical architecture to the great mosques it has an abundance of historical sites and interesting places to visit. Please watch the video below:


Even after the capture of Constantinople the city of Edirne remained influential with some Sultans actually preferring the city over Contstantinople or Istanbul as it became known. It was one of the largest cities in Europe with around 350,000 citizens at its peak in the mid 1750's. Today that population is less than half that number but it is still a vibrant city with some good restaurants, cafes and beautiful surrounding countryside. Most of the important sites are within walking distance of the city centre. The Selimiye Mosque ( Selimiye Camii ) is a magnificent building that dominates the city centre. 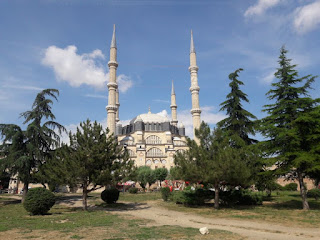 What a lot of people don't realise is that the Blue Mosque or Sultanahmet is a copy of Selimiye which was built by the famous Ottoman architect Sinan He is known to have declared this to be his greatest work. Selimiye Mosque is listed as a World Heritage site by UNESCO. There is also a very interesting museum - The Museum of Islamic Arts in the courtyard. Nearby is the Edirne Archaeological and Ethnography Museum with its jewellery, carpets, textiles, artifacts and calligraphy works. It is highly recommended that you also visit the Old Mosque (Eski Cami) nearby. This is the smallest of the old imperial mosques. It is famous for its calligraphic inscriptions. The Üç Şerefeli Mosque (Üç Şerefeli Camii), is also close to the Selimiye mosque and within easy walking distance. This mosque is instantly recognizable for its very distinctive minarets that all have very different designs. It was built on instruction of Sultan Murat II between 1437 and 1447. It gets its name from the three balconies on the tallest minaret. The interior dome is beautifully decorated. 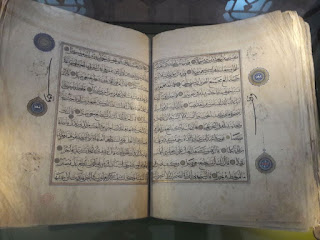 Visitors to Edirne might be interested in the only remaining evidence of the city walls - The Makedonya Kulesi or Macedonian Tower located near to the Üç Şerefeli Mosque. You can also find evidence of the Jewish community in Edirne. There is a large Jewish Synagogue which is in a very bad state of repair but still gives a hint of its former gandeur. Unfortunately it is dangerous to go inside since it was damaged badly by a storm in 1997. The side streets of the old part of Edirne have a number of old wooden buildings, some derelict and some in better condition. There are also some old Ottoman buildings and small mosques and even a stone Catholic Church. The Muradiye Mosque which is about a 15 minute walk from the Selimiye Mosque is an impressive architectural structure. It was built for Sultan Murat II between 1426 and 1436. It was once home to a Mevlevi Lodge or Whirling Dervish Lodge and is famous for its fine quality Iznik tiles which cover the interior walls.

The Ottomans were very tolerant when it came to other religions. Even today there is The Church of St Constantine and Helena in Edirne which is a Bulgarian Orthodox church built in 1869. It was funded by Bulgarians and if you happen to drop by on a Sunday there is every likelyhood that there will be a service taking place.

A little out of town but nevertheless one of the most fascinating places to visit is the ancient Ottoman Hospital or Darüşşifa which is now a medical museum. This museum was awarded Museum of the Year in 2004. It was originally a mental institution and part of the Beyazıt Külliyesi ( Beyazit complex ) which treated its patients through meditation and music within a courtyard of beautiful gardens rather than locking them up in cages as they were doing all over Europe. The history of the Hospital is illustrated through a number of wax models of students, patients and doctors with very authentic scenes of what life must have been like in that era. The buildings in this complex are outstanding and leave a lasting impression on the visitor. 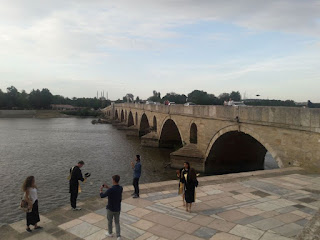 There are also two very spectacular Ottoman bridges that you should see. The smaller bidge by Kaleiçi spans the Tundzha river and further along the same road the second and longer bridge spans the Maritsa river. The middle of the bridge features an Ottoman lookout post. This is a popular site to stop and sit in one of the tea gardens by the riverside.

Whilst wandering around Edirne you cannot but help notice the number of sweet shops situated around the city. Be sure to pick up some badem ezmisi or marzipan and Turkish Delight. The Kallavi Kurabiye is also worth a mention ( a kind of bicuit of pistachio and honey with saffron ). Although Edirne gets its fair share of Bulgarians, Greeks and local Turkish tourists it is a city that should be on the destination list of anyone visiting Turkey particularly if they are interested in architecture, Islamic Art & Culture and the Ottomans.

The Long Bridge or Uzunköprü in Turkish, claims to be the world's longest stone bridge. It was built under the direction of Sultan Murat II between 1427 and 1443. It has 174 arches and is 1392 metres long and is 6.8 meters wide. It crosses the Ergene River and was built between 1426 and 1443 by the Ottoman Empire's head architect Muslihiddin.

The town of Uzunköprü is named after the bridge which was originally built to allow the passage across the river for Ottoman soldiers during the military campaigns in the Balkans. The bridge is currently part of UNESCO's Temporary Cultural Heritage list since 2015. Following this and the ongoing restoration of the bridge, a formal application for permanent inclusion by UNESCO has been submitted by the Mayor of Edirne.

Even though the bridge is so old it is still used as a main crossing over the river. It is wide enough for two way traffic as the video clearly illustrates.
Posted by BUK24hours at 13:08 No comments:

Gallipoli or Gelibolu in Turkish is a seaport town on the Dardanelles which opens up to the Sea of Marmara. It is historically famous as the location of the Gallipoli campaign of World War I. If you do an internet search almost everything that comes up under Gallipoli refers to the 8 and a half month military campaign. The most famous battle sites and war graves lie to the south of Gallipoli further down the peninsula but most of the town was still destroyed during the campaign.

This used to be a Byzantine fortress. It has always been of strategic importance to protect Istanbul. The Gelibolu ( Gallipoli ) War Museum (Turkish: Gelibolu Savaş Müzesi) dedicated to Mustafa Kemal Atatürk and his achievements. Also Gallipoli is home to the Piri Reis Museum which is located near the harbour.

Today Gelibolu is a busy ferry port. Ferries constantly cross the straits from Lapseki and many of the TIR trucks use this route to cross the Dardenelles. The world's longest suspension bridge is being built here and it will link up with the town of Lapseki on the opposite side. When completed, it will have a 2,023 m central span and will be 4,608 m in total length.

Gallipoli is a small university town with a compact harbour, vibrant shopping centre and plenty of restaurants and cafes.
Posted by BUK24hours at 12:14 No comments:

The island of Gökçeada is the largest of all the Turkish islands. It is also known as Imbros or 'Heavenly Island'. It does not benefit from large volumes of tourists like the nearby Bozceada and is not as commercialised.  Although popular with tourists from Istanbul and Izmir it is a tranquil and unspoiled island of natural beauty with an abundant water supply. The ideal sort of a place to chill out and relax away from the hustle and bustle of city life.

The island has a regular ferryboat service from Kabatepe on the Gallipoli Pensinsula and both foot passengers and cars are accommodated. The ferry crossing takes about an hour and a half. The island is excellent for hiking, swimming and windsurfing. The main town of Gökçeada has everything that you would expect and most of the hotels tend to be of the smaller Boutique kind. There are also some good restaurants on the island. 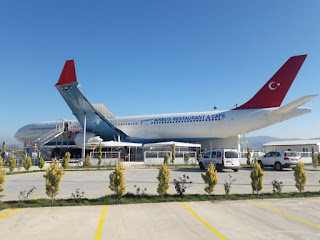 This is quite an interesting concept. On the main highway from Burhaniye you cannot help but notice a very large airbus aircraft sitting on its own in a car park without a runway in sight.

This is actually a restaurant which is also used as a venue for weddings and large parties. 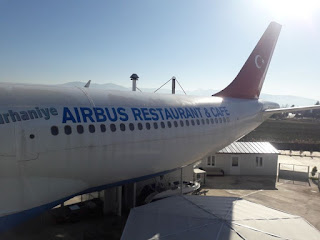 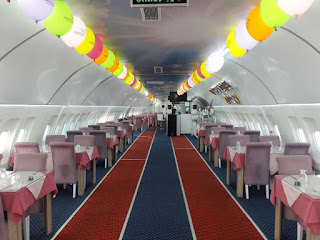 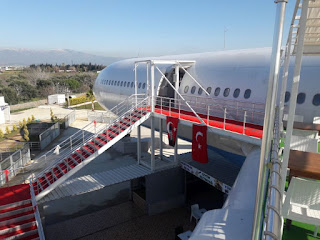 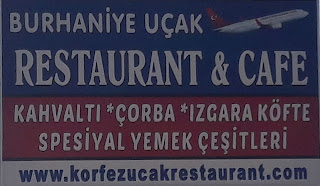 For more pictures and information you can visit their website at http://www.korfezucakrestaurant.com